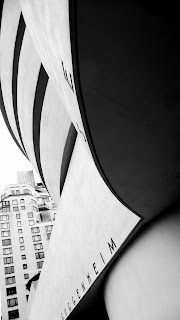 The photo of the Guggenheim is one of two photographs that I have in the Architecture 2012 calendar published by Rizzoli that is available now.

Other recent events include:

A screen print of a concrete poem is included in Visual Flux #2 published by Redfox Press, Ireland. See the work at the London and New York Book Fairs coming up in the next two weeks.

A visual sonnet work on paper has been selected for Art on the Plains XI at the Plains Art Museum, Fargo, ND, opening at the end of January, 2012.

Numbers 1 through 10 of the Viva Art Book Series (see previous posts) have been purchased by the University of San Diego, through Vamp and Tramp. The next five works in the series are being developed, two have been completed.

Visual Poetry work for exhibit has been sent to Write Now, an exhibit at the Chicago Cultural Center, opening at the end of September, 2011. The exhibition will be up until next April.

Haiku #92 was recently completed and printed by Hermetic Press, Minneapolis. Phil Gallo has featured it on his blog to illustrate his discussion on serifs.

Two dedication sonnets, for the Weisman Art Museum and the Isabella Stewart Gardner Museum have been completed and are under respective consideration.
Posted by helmes at 11:37 AM 2 comments:

For the past 3 years I have produced paintings and drawings based upon the 14 line sonnet, but without text. Recently I have done a few as site specific works that incorporate gravel, sand, dirt, pine needles, grass, flowers, etc. The site debris is added to pigment stick; with the lines delineated with masking tape. The yellow painting shown is 2'x3' and is A Taliesin Sonnet from a recent visit on 5-VII-11. The lower work is also 2'x3' titled A Walker Sculpture Garden Sonnet from 8-
VII-11.
Posted by helmes at 11:01 AM No comments: 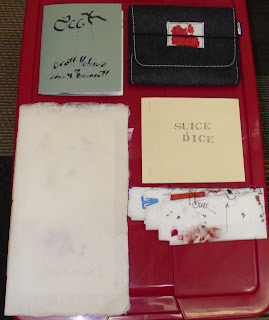 Here are the next five in the series:
#6 John M. Bennett
#7 Harriet Bart
#8 Philip Gallo
#9 David Dellaforia
#10 Marilyn R. Rosenberg
The next five will include Frances Van Maele, KS Ernst, Cathy M. Bennett and who knows who.
You can have the first ten books for $50 (total for all ten).
For a similar series, and one that was started over 60 issues ago, google WIPE.
If you would like to participate, please let me know and I will send you some sheets.
Posted by helmes at 12:05 PM No comments:

Here is an essay I submitted to a contest.

Does Poetry Matter?
Scott Helmes
3 times 13.
39.
Thirty Nine.
Thirty Nine Years.
If Poetry doesn’t matter, I’ve wasted thirty nine years of my life. That’s more than a third of a century. Should I caterwaul now or wait a few years longer, say a nice round fifty? What is one life anyway, when you consider what else I could have frittered away those precious seconds on. Maybe as a vacuum salesman, or a dedicated television watcher (since it’s been around my whole life; well almost), or a stumble bum.
Such is the life of an avant garde poet, a continual outcast from contemporary poetry, literature and language in general.
As Wittgenstein put forth, there is no such thing as a private language; and therefore thus a public language; and then there will be poetry; regardless of its popularity, significance, or use. Before books there was poetry. After books, there will be poetry. Its form is not the question. Whether or not it touches the mind, the heart or the eye, it is central to the fabric of life. It is not a question of quality, or feeling, or quantity. It exists. All that exists does matter and poetry will not be extinguished, may be even after humans. It is not a matter of convincing others, or I that poetry matters, which is a waste of time.  And it is not a question of importance, for I create poetry for the purpose of only creating- a fruitless activity if there ever was one.
The central issue then should be stated as a matter of influence: does poetry influence anything? The conduct of our life, the defining moments, do we think of poetry? Obviously today, for the majority, poetry does not occupy the central stage, or even share it with similar language based activities. And that may not be a good thing. The decline of difficult culture is to be lamented, only because critical culture creates critical thinkers, and great poetry is at the core of critical thinkers. Critical thinkers are not smart computer programmers, nor are they political pundits; they exist today in the sub-margins of the landscape, They’ve escaped into the bowels of academia, much taken with their own circular formulas and logic, rarely straying from the friendly confines of being tenured. Thoughtful opinions, carefully reasoned positions, in depth commentary (outside the latest news), are buried under the noise, the bling, the sound bite, and the condensed text, such as a twitter, never to reach a significant mass. The vehicles to convey these thoughts are lost in commerce, reaching a dead end.
And thus, what of the future?. Poetry may be like a seed, to lie fallow, and then burst forth in evolutionary forms, unrecognizable to many. It may be a buzzing constant, always in the background, but not on center stage. It may marry and produce hybrid offspring, adapting to the march of time. It may be a phoenix.
Yet poetry continues to matter on a singular, individual level; for poetry put me in touch with peoples from around the world and still does; even from behind the censored Iron Curtain and Cuba and those who did not speak English-all this before the web. It led to readings and performances in , , , , , , , and other backwaters. I got to see and ponder the work of many others that was exciting, avant garde and strange. It matters because I was able to be in touch with people unknown in a curious manner, an intelligent dialogue, and with sympathetic strangers who became the known from the unknown. It also gave me a chance to send a lot of paper to a major university library for endless storage. And maybe someday, a desperate graduate student will spend countless hours trying to figure out what it all means; and then graduate into a poetry stifled world.  It lifted me from the fog enveloping my neurons. Striking out on new territory long ago, poetry was this glittering snow field of language, from which if language didn’t matter, than poetry didn’t matter and I didn’t either. But I couldn’t determine that at the start; and now that it is more towards the end; those remaining seconds breathe language, and thus poetry as if the previous thirty nine years count on it.
Posted by helmes at 10:21 AM No comments: 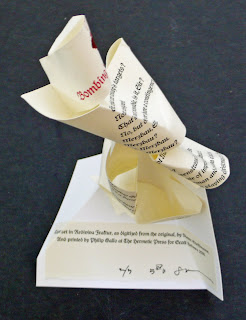 Broadside of 'Bombing Merzbau'
An original Scott Helmes poem letterset by Philip Gallo at Hermetic Press. The edition is 3, with each being different. Available for purchase at $25 each.
Posted by helmes at 1:09 PM No comments: 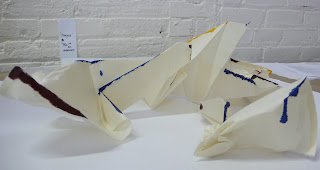 Here are some additional images for my experimentations with '3D' drawings. It a series I've tentatively entitled 'Lines in Space'. They are drawings done on a variety of papers, including glassine. The works are primarily watercolors. Some are stamp prints 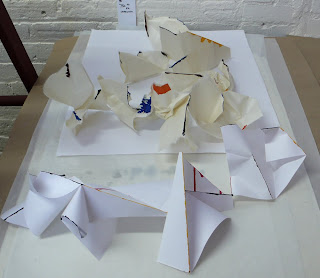 , though none of those are shown here. The top photo is a closeup view of the top drawing in the middle photo. The third photo shows about seven different drawings. 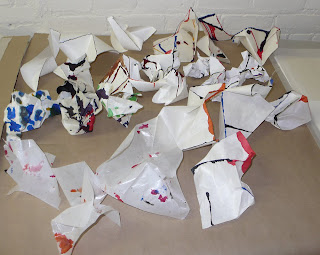 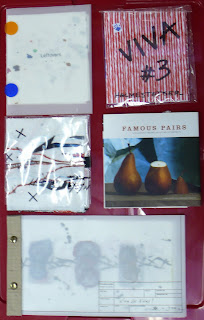 Here are the first 5 books in the Viva Artists Book Series. The books are from 4 to 6 pages in length and printed on Viva paper towels. I start with the basic pages and send them off to other book artists to finish the book. So far here are the artists involved:
1. Scott Helmes
2. Anne Gorrick
3. Carol Stetser
4. Wendy Collin Sorin
5. MusicMaster (Tom Cassidy)
The next books will be by John M. Bennett, mIEKAL aND, Harriet Bart, and Philip Gallo.
One aside, I sent #1 in the series to the CEO of Kimberly-Clark as a gift and the idea that maybe Kimberly-Clark could start such a collection, have an artists book program using their products or run an internship program. No such luck, they sent it back unopened with the Consumer Relations form letter saying they don't accept ideas for their products. Talk about not getting it.
So the idea is to continue the series and then sell them in groups of ten for a very low price ($5 each-all proceeds to the artist) to an interested party. If you would like to be an artist in the Viva Artists book series, let me know and provide your mailing address. If you are interested in purchasing the first ten in the series, let me know also. And remember, progress in Art through paper towels!!
Posted by helmes at 1:20 PM 2 comments: